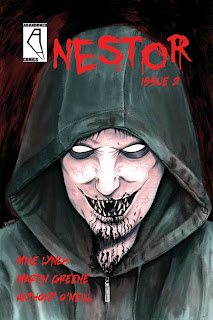 http://www.indyplanet.com/store/product_info.php?products_id=7484
***!!!FANG-TASTIC NEWS!!!***
All my life i have only ever aspired to become one thing "a COMIC-BOOK artist", iv never had any form of training and iv never went to collage, so for a long LONG!!! time there, i thought it was never gonna happen, that was until i met these two awesome dude's.
When i met mike and martin for the first time, we all just clicked, the stars aligned and i gained some footing on the first stepping stone to realizing any project, book, or if your really lucky "comic book" that first stepping stone was "there faith" in an artist that had never done anything like this before and from there skipping across stepping stones became a yearly sprint up a very high mountain.
Nestor was there baby and they were willing to let me share custody, so i nabbed the chance, gritted my teeth, locked myself away with my drawing board and tried desperately not to panic, while simultaneously trying to remember every chapter and page of "Stan Lee's how to draw comics"
now some of you are probably saying "OK so whats the big deal you drew a small press comic book"
i say (and i hope you'll excuse my french here) F**K THAT "SMALL PRESS" TALK!
Every single publication you know of was at one stage or another "small press" all it ever took to make it shed that stigma was one thing "NOTICE",
and to be totally honest with you the small press industry has stuff out there which can be far Superior to any major publication
just take a look at some of these names and if youv read any of this stuff you'll know what I'm talking about:
AIEDEN COURTNEY'S COMICI GAEL
UPROAR COMICS ZOMBIES HI
TOMMY KELLY'S HOLY NUMBERS
STEPHEN COFFEY'S CELTIC KNIGHTS
MAURA MC HUGH'S JENIFER WILDE
ROBERT CARLEY'S LEAGUE OF VOLUNTEERS
but to name a few
These are story's of great imagination and fantastic story telling, and now, its "ABANDONED COMICS" turn to enter the game.
Mike and martin have officially told me that my issue of "NESTOR" (issue2) has finally reached publication and to say i couldn't be happier would be one hell of an understatement.
this is the achievement iv dreamt of my whole entire life and to have it come to fruition like this is just
totally over whelming.
so there you go the reason your receiving this very random VERY! long winded write up is to say:
***!!!YOU CAN FINALLY GET YOUR CLAWS INTO THE VISCERAL PLEASURE THAT IS "NESTOR2"!!!***
at

http://www.indyplanet.com/store/product_info.php?products_id=7484
so go... now... share in this child hood dream of mine with me, and click the link to grab your issue today.
Thanks for taking the time to read this folks,
Ill see you in the funny pages
wait'll they get a load of me!.
toodle pip! :)
http://www.indyplanet.com/store/product_info.php?products_id=7484
Posted by Anthony O' Neill at 4:41 PM

for someone who is just an artist, you write so well! You always manage to make me laugh and I just get pulled into your stuff like a magnet!!

Please check out some of my past posts by clicking on the link at the end of the page thanks :)

click this icon for the ICN sketch a week (NOODLERS)